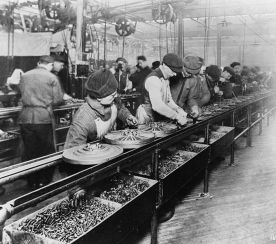 An assembly line worker in a factory noticed that production units were arriving at his station missing many of their standardized components. The plant manager was notified of the situation.  The message was then relayed to the company’s executives.  After much expert deliberation, the assembly line worker was directed to provide advanced production in order to ensure that each unit would have all of its required parts before arriving at the next assembly station at its scheduled time.