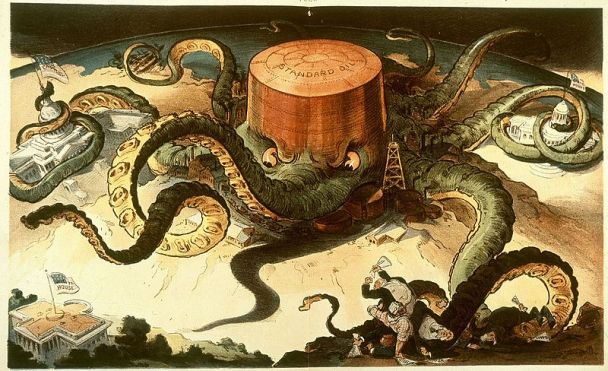 Did a mayor of New York City really say that the Rockefeller Foundation was a giant octopus that had its tentacles wrapped around the schools?

Here’s what Wikipedia has to say:

[John Francis] Hylan’s most famous statement against “the interests” was the following speech, made in 1922, while he was the sitting Mayor of New York City:

The real menace of our Republic is the invisible government, which like a giant octopus sprawls its slimy legs over our cities, states and nation. To depart from mere generalizations, let me say that at the head of this octopus are the Rockefeller-Standar Oil interests and a small group of powerful banking houses generally referred to as the international bankers. The little coterie of powerful international bankers virtually run the United States government for their own selfish purposes.

They practically control both parties, write political platforms, make catspaws of party leaders, use the leading men of private organizations, and resort to every device to place in nomination for high public office only such candidates as will be amenable to the dictates of corrupt big business.

These international bankers and Rockefeller–Standard Oil interests control the majority of the newspapers and magazines in this country. They use the columns of these papers to club into submission or drive out of office public officials who refuse to do the bidding of the powerful corrupt cliques which compose the invisible government. It operates under cover of a self-created screen [and] seizes our executive officers, legislative bodies, schools, courts, newspapers and every agency created for the public protection.